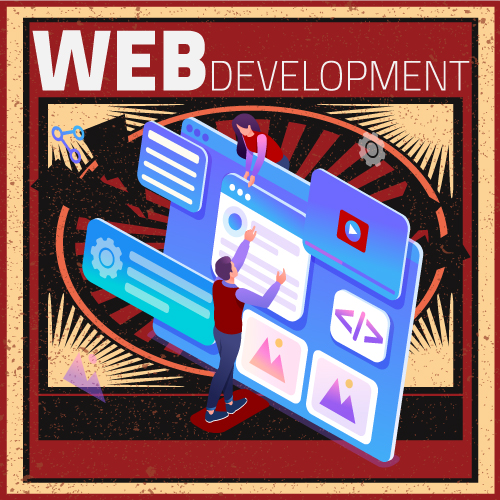 Whatever you have a website and mobile application or not, you better not miss this article.

Web development is all about the things that happen behind the scenes of every website you visit. The website eventually looks the way you see when you use it as a user like:

The goal of web development is to enhance a user’s experience through his visit to the website.

So, who is doing that awesome work?

1) Front-End developers are the ones who are responsible for the final image of your website or app. The interface that visitors see when they open the website or the app and interact with it and navigate through the elements and pages, doing some actions like downloading or uploading something, filling forms, and subscribing to your newsletter.

So the front-end developers can be able to do all of that and they need to use three main programming languages: HTML, CSS, and Javascript. We will discuss those languages later in this article.

2) Back-End developers are behind the scenes players.they are responsible for the hidden parts of the website that visitors don’t see. They write code that runs the webserver to apply all the functions needed to be done so the visitors can use the website easily, like storing and providing content to the users, all the technical parts like the speed of the website and accessible for all browsers, shortly giving an amazing experience to the users.

Unlike the Front-End developers, the back-end developers specialized in server-side programming code like Java, PHP, and Python, and at least one language of them required to run this process.

3) Full-stack developers, those guys doing the roles of both front-end and back-end. They design the interface for the website or the app and all the processes that visitors don’t see. They are responsible for everything related to web development. A full-stack developer is well known with client-side programming languages like HTML, CSS, and Javascript and one or more server-side languages such as PHP, Python, and Java (it’s different from Javascript).

Does your business need a mobile app?

Some businesses need mobile apps, usually, the ones who require quick access from their customers to handle emergencies issues like banks, travel bookings, internet providers, and a lot more.

But some businesses don’t necessarily need a mobile app, so before taking this step think of if you need it or not.

Mobile apps are all about generating a unique user experience. You create an app for your business to provide easy, fast and one-click access for your customers. You should make them feel that you are closer to them even more and you are trying to deliver more solutions to them in the easiest way possible.

Also, it’s a great tool to remain your brand name in your customers’ minds through frequent offers and encourage them to take some action.

Mobile apps enable you to reach your customers more easily.

No need to tell you that the digital world nowadays is growing so fast and you have to be part of it and take your position among the competitors.

Having a website is not optional anymore because it presents you online, it’s your online store. The same as a mobile application as long as it benefits your business.